Birthdays December 2017 - Have a Goat


The last piece of art I finished in 2017 was also the third and final birthday present ACEO I created in December, this time for Aryssa Hutchins!  I followed the same theme as with the previous two and drew what I thought to be the recipient's favorite animal.  Even though this drawing was for my first little sister, I had a really hard time deciding what her favorite animal must be 😲 I finally settled on a goat and was happy and relieved when she confirmed that I made the right choice XD 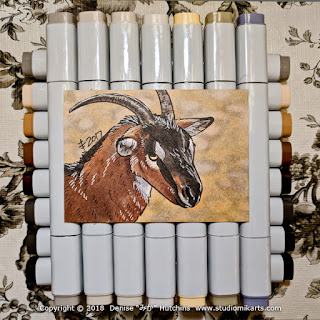 Although I only created three birthday present arts in December 2017, when you combine it with all the Christmas presents that I also made that month, this piece was the 17th ACEO I completed!  Then adding on the Tomodachi Fest commission and Christmas card illustration, I finished 19 pieces altogether.  I don't know if I've ever created so many pieces in such a short time--they were all done within a three-week span.  If I keep making lots of art presents around the end of the year, I imagine this won't be the last time XD  Hopefully I can plan ahead and make it a bit less hectic in future!
Written & Illustrated by Denise みか Hutchins
Email ThisBlogThis!Share to TwitterShare to FacebookShare to Pinterest
Labels: Animals, Art, Birthday, Drawing, Gifts
Newer Post Older Post Home