This was another year wherein I decided to create art as gifts for Christmas. As with some previous years, I chose an overarching theme that every present would share: for 2017 it was "You as a Cat!" I had a relatively large gift list so I also went with little ACEOs for the format to ensure I could actually get everything done on time (^^; I'm proud to say I did! The first present I made was for my husband's mom, whom I dubbed "Mama-chan" long before Sean and I were married. I actually used a photo I took at Thanksgiving just weeks earlier for the human reference image. I chose a cat reference photo that seemed to have the same sort of expression. I made it a light-colored red cat to imitate Mama-chan's hair color. The idea with all of these cats was to make a more realistic cat version of each person, rather than a cartoony image where the cat has a human haircut and wears glasses and such. So, while this cat has a tabby pattern, hopefully it's obvious that Mama-chan does not XD

Available for purchase on cool stuff like mousepads and coasters! 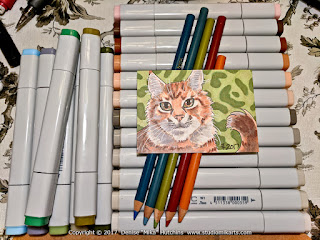 Since I was in a rush to complete my full list of ACEO gifts, I didn't take any progress photos, but I did take one photo after each piece was finished which shows the art along with every marker and colored pencil that went into its creation :3 Shows really well how much detail and effort goes into even a tiny trading card-sized artwork at Studio Mikarts!
Written & Illustrated by Denise みか Hutchins
Email ThisBlogThis!Share to TwitterShare to FacebookShare to Pinterest
Labels: Art, Cats, Christmas, Drawing, Gifts, Holidays
Newer Post Older Post Home