The second ArtSnacks box of 2017 is here and ready to be revealed!  For those who don't know, ArtSnacks is a monthly blind box subscription for art supplies.  They send out 4-5 full-sized art tools every month, often including sample sizes of other products on top of that, and the contents are a surprise until you open your box!  I've been a subscriber for several years now and I'm still happy to open my box every month~  Let's see what I got this time! 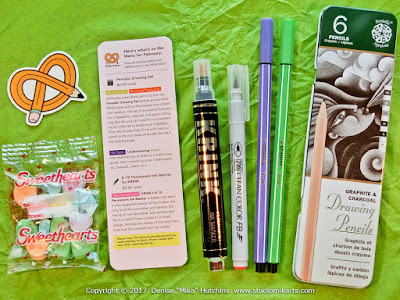 Here's what's on the menu for February: 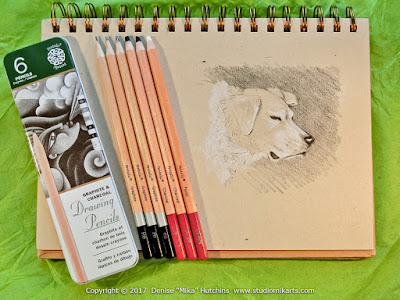 It's always very impressive when I receive a complete drawing kit in my monthly ArtSnacks box.  I mean, that's 6 full-sized items right there!  I feel familiar with this Pentalic setup because I already received a similar drawing pencil set from a different ArtSnacks box, but this one is even better, for me.  The set includes three hardenesses of pencil—HB, 2B, and 6B—one soft and one medium hardness charcoal pencil, and one white pastel pencil.  I didn't realize until I actually started testing these tools that this set is perfect for my travel sketches; I always pack a white charcoal pencil, a black charcoal pencil, and a graphite pencil when I go somewhere I'd like to sketch with ease, like the zoo or an out-of-town vacation.  Of course, to make proper use of the white pencil, I bring a tan or grey paged sketchbook, as well.  That's what made me realize I could use this kit on-the-go: I started to sketch on white paper and had to switch to tan so I could really show off the set's potential.


Something else that makes this kit nice for travel is the metal case it comes in.  The pencils are all cradled in a molded plastic rest with a thin sheet of foam providing cushioning from above.  Basically, the tools are well protected and conveniently organized while in the case.  Next time I go to the zoo, I may bring nothing but this set, instead of my travel pencil case, and my sketchbook.  It'll be even easier to carry and manipulate!  I'll have to remember to sharpen all the pencils first though, so they don't get dull too quickly while sketching (I could bring a sharpener but the point in this scenario is to bring as little as possible).  Which reminds me, I was very impressed by how incredibly sharp the graphite pencils already were!  Furthermore, the manufacturers sharpened the graphite pencils to a longer, thinner tip while the charcoal and pastel have shorter, wider tips.  I feel that's a good detail for Pentalic to have considered; it shows they really think about what artists want. 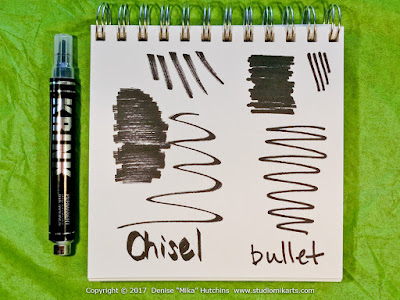 When I saw this, I immediately thought, "I already have one of these," and indeed I do, from a previous art supply box (can't remember if it was ArtSnacks or the defunct Pigment + Palette).  I remembered so easily because I recently tried using the older one and found it disappointing.  It was encouraging, therefore, to see the menu explain that this particular marker is the redesigned version, supposedly with better ink flow and a reversible tip.  The tip is definitely reversible—one side is a large bullet while the other is a wide chisel—but I won't be switching again.  Even being extra careful, I still stained multiple fingers with the ink.  If I had rubber gloves or tweezers that I didn't mind inking up, perhaps I wouldn't have had a problem, but that's really too much for this one little thing.  As it was, I hoped a paper towel folded over several times would be enough to protect me through the 5-second operation but, alas.  I just don't think it's worth it to bother with flipping the tip around; I'd rather just buy two markers.  Furthermore, after trying both tips, I still found the chisel to have the same issue as the original K-70 that I mentioned before: the ink does not flow evenly.  I can't draw a wide line with the chisel tip that comes out as one solid mark.  I was hoping the improvements would have fixed that.  With a marker this big, the only thing I'd really want to use it for is filling in large areas with black but the spotty delivery of the chisel tip means I'd spend just as much time filling in as if I used a smaller marker.


At least the bullet tip works well.  Now I have one marker with a chisel (the older one) and one with a bullet (because I don't want to bother with the mess of switching) so the upside is I ended up with two different tools :3 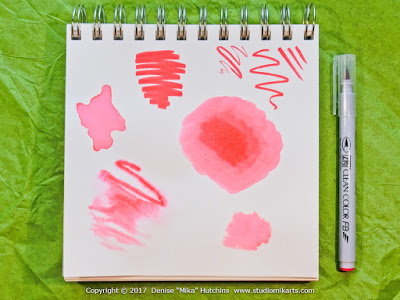 I already have a few Clean Color markers from previous subscription boxes (I even have the same exact color, carmine red, in the Clean Color F series!) but this is the first time I've received one from the FB line.  (The menu means it when it says "New Product" because I couldn't even find it listed on Amazon!)  FB stands for "fiber brush" and I found it to be quite a firm one.  You really have to lean into it to get thick lines, but it does a lovely transition from hair thin to reasonably thick.  Using the side of the tip also works great for filling in, it's the best way to get big fat marks out of this tool.  Since the ink is water-based, I tried a few techniques with my water brush.  First I used the water to spread a big patch of ink.  It went quite far which shows this ink is very pigmented.  The vibrant pink color it thinned out to is beautiful, also.  The next thing I tried was wetting a section of paper then writing on it with the marker.  It made pretty cool effects but it really drained the tip of color.  My next experiment further drained it: I wet a section of paper, drew in it, then dripped more water onto that ink.  It produced a really beautiful, even, feathered patch of color but with how much it drained the tip, I wouldn't want to use the marker like that all the time.  I had to press the tip into a paper towel until the color properly returned so I could continue with my final test.  I drew a patch of ink on the page then dripped lots of water onto it and gently swirled the page.  The result was another cool effect: an organic blob with more deeply hued edges.  The only problem with this technique is that it takes forever for the water to dry up. 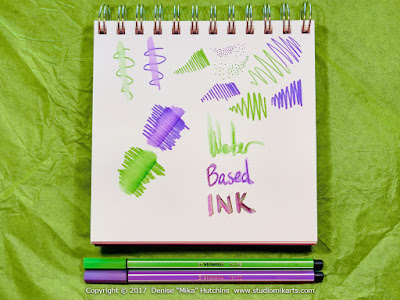 The final item in my February box was the Stabilo Pen 68 and I received two colors, a purple defined only by the number 55 and a green numbered 43.  I love when ArtSnacks sends more than one color of the same product because the color can often make a big difference in first impressions.  For instance, the green and purple I received both laid down very vibrant, solid lines and, aside from the purple being darker, didn't seem too different.  But when I used a water brush to test out the water-based ink, they revealed their distinct properties.  The green became very transparent, more easily blending away the original lines, and was quickly brushed out to clear.  The purple, on the other hand, remained fairly opaque when the same amount of water was applied, left the original lines mostly intact, and obviously would have required a lot more water and paper to be brushed out to clear.  This doesn't mean one color is better than the other, just that they have variations which might need to be taken into account.  Receiving two colors and seeing the differences also gives a better idea of what one might get if they decided to invest in more of the product.  Differences aside, both of my Pen 68's created beautiful, even lines and I think this marker collection would do really well with stippling techniques because the firm tips create dots that are generally always the same size and shape.


Goodies & Bonuses
As always, ArtSnacks includes a few extras in each monthly box.  I received the all-important menu, which explains what each item is and also has a goofy art riddle that makes me snerk every time (the menu was tinted pink this month for Valentine's Day 💘), a sticker featuring the cute ArtSnacks logo (my beau always calls my subscription "your ArtPretzels" because of the logo XD), and a little bag of Sweethearts candies, which I ate up before I even finished my first draft of this blog~


This was a really generous ArtSnacks box!  Not only did we receive a tin with six full-sized drawing utensils, there were three other types of art supplies in four different colors!  Maybe the ArtSnacks folks were just trying to show how much they love us.  We love you, too, ArtSnacks!  Happy Valentine's Day!