Earlier this year, I purchased a subscription to ArtSnacks.  It's a monthly blind box that comes with 4 to 5 full-size art supplies to experiment with.  If you're like me, the rush and excitement of trying out new art supplies is utterly addicting, so this subscription has been AWESOME.  Here's my unboxing and review of the September 2014 box!

It's difficult for me to describe how excited I was by this month's box.  To be honest, it was just one item that did it: the watercolor marker.  A few weeks before this box arrived, I almost bought a full set of these watercolor markers to try out.  I managed to hold off because they were spendy and I didn't actually need them (plus, I reminded myself, I have ArtSnacks to satisfy my new-art-supply cravings).  It's almost as if I was rewarded by Fate for my good behavior, ha ha.

I received five 8.5x11" sheets of artist vellum in the roll.  Transporting in a roll makes sense but it also means the sheets are tough to keep flat afterwards.  I immediately squished mine in a sketchbook.  They've been there for a couple weeks and are perfectly serviceable now.  I used a sheet for my ArtSnacks Challenge and was satisfied with its performance in conjunction with the other supplies from this box (though it was too lightweight to try any wet watercolor techniques).  Although it's an interesting paper to work with, especially drawing on both sides, I don't think it's something I'll be rushing to buy when I run out.  It's fun, different, and can jumpstart one's creativity but it's not what I'd call an artist's staple.

The iconic gold and green Kimberly pencil (I got a 2B) is something I've been long familiar with.  I can't even remember when I first used this brand of pencil.  I'd like to say it was when I started university but it may have been earlier in high school or even at home as a child (my dad took his fair share of art courses when I was a wee lass).  It's just your standard, reliable, wood-encased graphite pencil.  Now THIS is an artist's staple.

Although the ArtSnacks menu (and Amazon; I did some research) calls it a marker, the ZIG Flexible marker behaves more like a brush pen.  I suppose the name doesn't really matter but when I go in expecting a marker, I get a bit confused when it doesn't act like one.  That being said, this is not a bad tool!  When I used it with 'brush pen' in mind, I was able to pull out a nice variety of lines, though the ink seemed to dry a bit translucent (maybe that's why it's called a marker?).  As the "Mangaka" title suggests, it does great lining for manga-style drawings.  My marker is labelled "Medium" (I assume that refers to nib size) and holds black pigment.

The eraser in this month's box is very interesting.  This is the second eraser I've received from ArtSnacks but it's completely different from the first: long, pink, and simultaneously pointed and curvy.  Despite the Correc-Stick's suspicious pink color, it doesn't leave unsightly pink marks like #2 pencil-style or Pink Pearl erasers.  And the weird shape of this eraser's body has a point, literally and figuratively.  The curvy form fits very comfortably in one's hand while the pointed end works well to erase small areas.  I flipped it around and found it just as comfy while erasing with the blunt end.  I wonder how it will be when the pointed end gets used up or worn down flat.  I haven't erased enough--though I've used it on several drawings thus far--to even guess.  Until then, it seems it will serve me well.

As I mentioned above, the most exciting item for me was the watercolor marker.  I may have squealed for joy when I saw it!  The marker comes with a brush tip on one end and a fine tip on the other and I received a beautiful cerulean blue color.  (Interestingly, although this is certainly a full-sized item, it says "FREE SAMPLE" and "NOT FOR RESALE" in three languages on the body!)  So far I've only experimented with this item on the strip of watercolor paper and the artist vellum that came in this month's ArtSnacks box so I can't give it a really detailed review--not like what I could do if I used a full set of them on a large painting--but I will say I am definitely buying more (it doesn't hurt that Winsor & Newton provided a coupon!).  If you enjoy watercolor, I think this marker would be right up your alley.  The color lays down smoothly from both tips, it yields a wide variety of line thicknesses, and you can get some nice effects if you paint or spritz water over it on the paper.  One thing it doesn't do is wet-on-wet.  I tried it on the watercolor paper, wetting an area with water and then drawing over it with the marker, but instead of laying down color, the marker sucked up the water!  I expected to get a cool effect along the lines of wet-on-wet with watercolor pencils, but the physics of the marker doesn't allow it to work that way.  This doesn't ruin the watercolor marker experience, it's just something to keep in mind while using it: marker first, then water.

The September ArtSnacks menu suggested testing the watercolor marker on the strip of watercolor paper that was provided but I decided to go a step further and test all of the drawing media on it.  I suppose this almost counts as an ArtSnacks challenge, except I didn't use the vellum sheets! 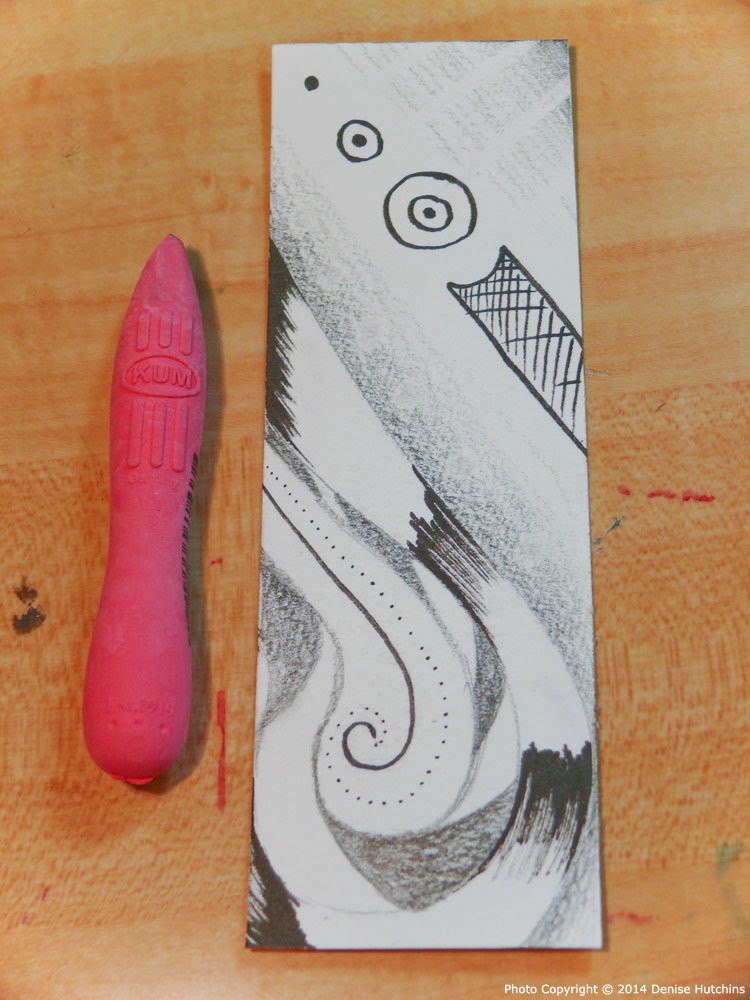 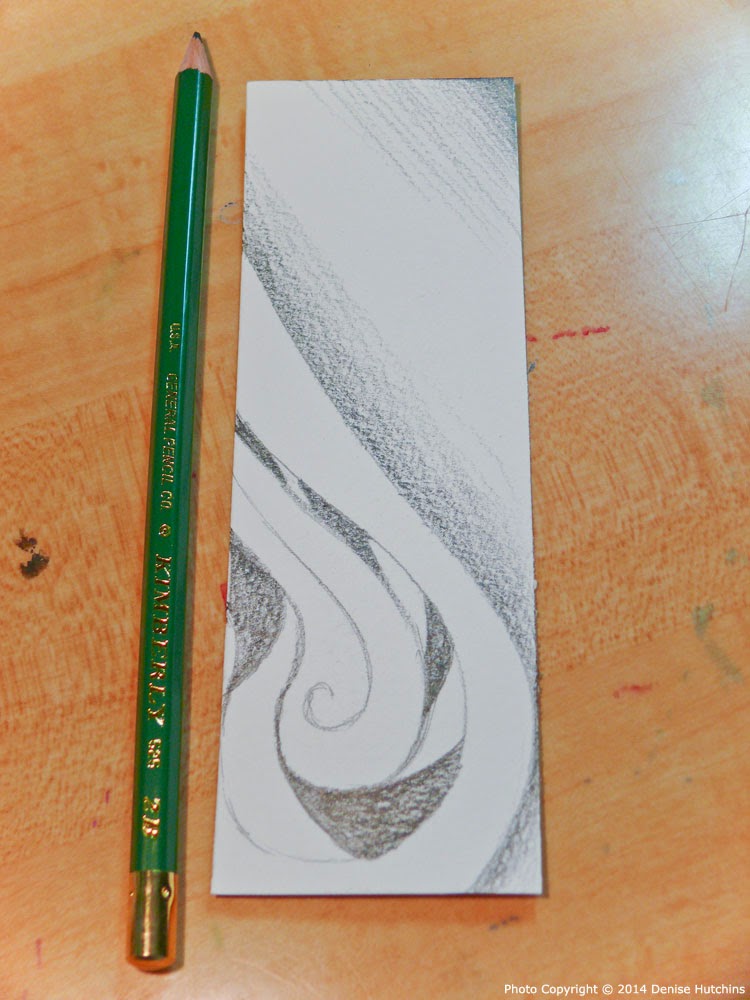 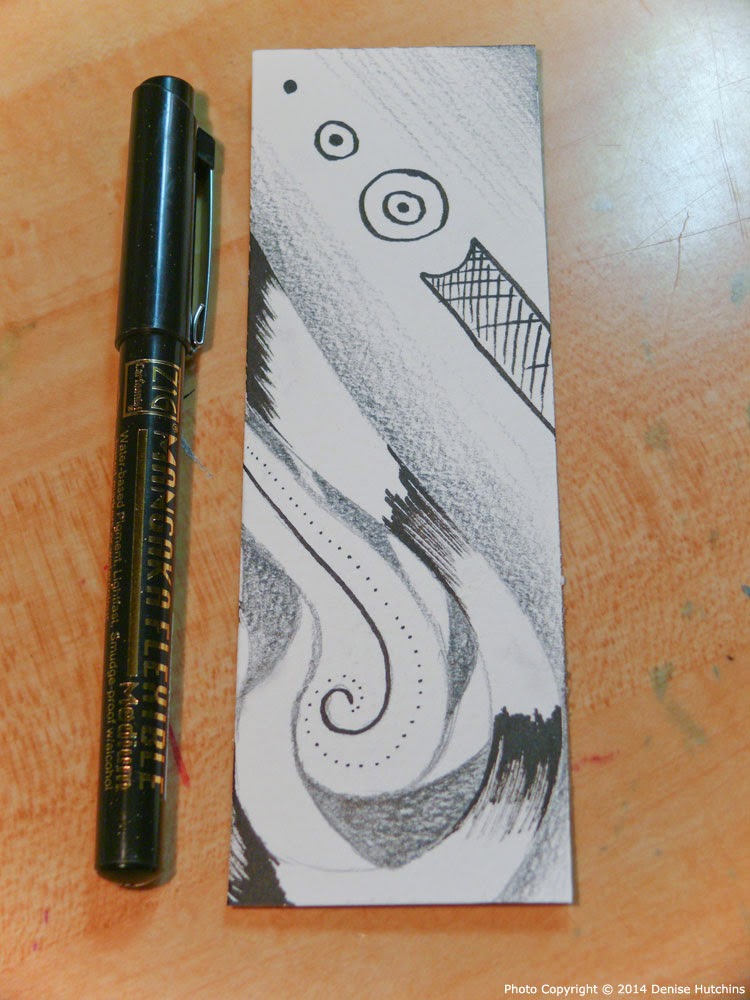 I started my watercolor paper experiment with the pencil.  2B is a nice hardness for something like this, not too messy but still able to get a bit dark.  I augmented my pencil lines with the black marker next, trying some brush-like strokes as well as hatching, stippling, and other linework.  To give the Correc-Stick a shot, I erased some lines and small circles into the graphite at the top.


Finally, the part I could hardly wait for, I played with my watercolor marker until I achieved the end you see above.  I colored in and brushed through some areas with marker alone, adding no water, while others I either gradated the color, smoothed it out evenly, or plopped a little drop of water onto for a rough, organic edge.


Overall, this may be the best ArtSnacks box I've gotten to date.  Definitely it's gotten me the most excited in several months.  What do you think of the contents?  Do you have any questions about the supplies that I didn't answer?  If you got this box, were your items different from mine?
Written & Illustrated by Denise みか Hutchins
Email ThisBlogThis!Share to TwitterShare to FacebookShare to Pinterest
Labels: Art Supplies, ArtSnacks, Blind Box Subscription, Demo, Review, Unboxing
Newer Post Older Post Home